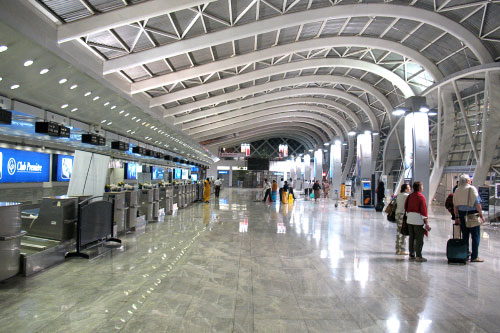 There is no regular flights of civilian airlines are served this airport, and you can get to this place only by airtaxi, private aircraft or military aircraft. But nearby there are other airports, where you can get by regular flights (see airports near the city of Gassim). You can check flights using search form below.

How get to/from Majma Airport

If you need get from the Majma Airport to the city center or to other cities or resorts, or vice versa, without any difficulties with local transport, you can use the transfer order the search form below. This way to get from the airport is different from the ordinary taxis, because it's more comfortable and you will not have problems with the language barrier (you do not have to explain to the driver in an unknown language where you need to get). When you will make a booking, you can specify special travel conditions, if they are required, such as a trip with children or people with disabilities. When traveling with children, special child chairs provided, if the law of the country is required.

When you will arrive at airport, the driver will wait for you after boarding the plane with a sign with your name, and you can easily get to the desired place from any airport in the world.

You can find and book transfer from/to airport online now:

Leave your review about Majma Airport: